Eleven years later, my life situation is no longer dire — which means that the pressing need to stop dwelling in the loops of lack is also no longer dire. Last night, as I was pouring salt into the soup I was making, I found myself wandering off into what I was going to do when I got done, and all the things I needed to do after that. And after that. I started feeling grumpy and exhausted and put-upon by the world. Then, I caught myself and realized I was making the whole thing up and that’s how the mind works:  it makes things up, it tries to scare me. Us. And I realized I had a choice. Continue being exhausted and cranky and miss the sight of the salt crystals dissolving like snow in the broth — or stop. I felt like the patient in Bob Newhart’s skit. The one who goes to the psychiatrist and complains about his problems. Each time the patient tells the psychiatrist what is wrong, the doctor says, Stop it. Standing in the kitchen, I realized I could stop it (and transport myself back) or continue it (and keep sledding in the sludge of my mind).

Want to learn more?  Take a leap and join Geneen on retreat, November 5-10, 2019 at Mount Madonna Center in Watsonville, CA. Surrounded by the magic of our mountain-top setting, you'll experience first hand what it feels like to end the suffering and being fully alive. Register by July 25th at our Early Bird Rate and save $150. For more information, click here or call our retreat manager Judy at 703-401-0871. What are you waiting for? 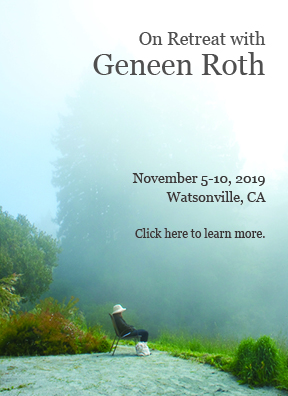 2 responses to “Ticket to Joy”