Stitches of Our Lives | Geneen Roth

My friend Catherine recently told me about a fifty-year-old friend of hers who’d been a member of a sewing circle for ten years and was now dying of brain cancer. “I labored and sweated over my crooked stitches,” the friend said. “And I always felt ashamed for not making the right-sized or shaped stitches. As if making straight stitches actually meant something about me or my life. Now, the doctors say I have six months to live and when I think about the time I wasted worrying about those crooked stitches…” she said without finishing her sentence.

Most of the people I see spend most of their lives worrying about their own version of crooked stitches—the size of their thighs, their hips, their abdomens. As if those things mean something true or real about their lives. As if when we get to the end of our lives, a number on a scale will mean anything at all.

A few years ago, I was in a car accident. We were burbling along, two friends and myself on our way to a party, when suddenly we got sideswiped a few times by someone who ran a red light. After our car crashed into two lampposts, three other cars, and one stop sign, we came to a total standstill. I crawled out of the hole in the side (that used to be the door) and although my ankle throbbed and my head felt as if it a brick had fallen on it and I couldn’t breathe very well, I was alive. And suddenly, just being alive was enough. Was miraculous. Suddenly nothing was important but the fact that I was still breathing.

I needed a wheelchair for six weeks (due to a sprained ankle and a set of bruised ribs), and sometimes, when my husband was busy and couldn’t transport me from the dining room to the living room, I’d sit outside and stare at the feast in my backyard. It wasn’t anything out of the ordinary. Just the usual clouds, trees, wind. Dog barking. Birds trilling. Wind blowing. The everyday jubilee I’d been passing on my way from desk to kitchen to desk as I worried about the stitches of work, family, errands, responsibilities. As I rushed frantically to keep up with the pace of emails, text messages, book deadlines. But since I had a concussion and couldn’t think clearly, and since my usual mode of running around was impossible, I had a good excuse to stop everything and contemplate the little things. Like living and dying.

The first time I taught my retreat after the accident, I asked my students to make a list of ten things they loved most about being alive. They said things like: reading my daughter to bed, swimming with my son, holding my husband’s hand, being in the forest, taking a hot bath. Then I asked them what they would spend their time on if they knew they had a year to live. All of them elaborated on different versions of doing what they loved and of loving the people they cherished. Not one of them mentioned losing weight, although some of them did say that they would only eat what they really really liked. Which brings me to the subject of dieting and weight loss and being fully alive.

I read a study recently published by The New England Journal of Medicine in which three hundred “moderately obese people” were followed on three different diets: The low-carb diet, the low-fat diet, and the Mediterranean diet (healthy fats, some dairy products, abundant fruit and vegetables). After two years of tightly controlled dieting, the dieters lost an average of six to ten pounds.

And, it turns out, that in the years after the study, everyone who participated in it gained back most of the weight they lost. Two years of strict dieting and the end result is that you lose ten pounds that you then gain back? Hmmm. There’s gotta be a better way to spend your time.

It’s called: Live the life you have. Love the body you’ve got. (This is not the same as: Give up and binge).

Part of the reason that diets don’t work is that when we are obsessively focused on our weights, we are not focused on doing what we love. On loving what we love. We are thinking about what we will look like when we lose weight. We are spending our days on counting calories or fat grams, as if we have forever to be alive, forever to turn to what we truly love.

When the college professor Dr. Randy Pausch’s last lecture swept through the Internet, when he spoke about having pancreatic cancer and six months to live, he spoke as a man whose priorities were clear. He wanted to spend every second he could with his family, he wanted his kids to have a visible record of his love. "I am maintaining my clear-eyed sense of the inevitable,” he said. “I'm living like I'm dying. But at the same time, I'm very much living like I'm still living."

Every one of us has a terminal illness: it’s called life. Although we want to believe that death only happens to other people, it only takes a second or two to realize that the D word is going to happen to us, too. A car accident. A serious illness. An iffy mammogram. Suddenly, it’s our life that is at stake. Our life whose stitches are numbered.

Ask yourself how you want to live.

Ask yourself what you would do with your time if your days were numbered (because they are. You just don’t know what the number is!)

And, oh: ask yourself what and how you would eat.

While you might be tempted to say, “I’d eat cheesecake all day and pizza all night because who cares about clogged arteries or cholesterol?” ask yourself if that is true. If life is so precious, why would you want to spend one minute of making yourself sick? Why would you spend even thirty seconds of it causing yourself discomfort and therefore taking your attention away from what and whom you love?

When I was nineteen-years-old, I was on a rickety Italian flight with my roommate from college on our way from Pisa to Rome. We were convinced the plane was going to crash and in the last few minutes of the flight, I figured that as long as I was going to die, I might as well die eating chocolate. Despite the turbulence, I managed to polish off the entire five-pound box of chocolate I’d bought for my mother. If I had died, I would have gone out burping and in a sugar coma. Not exactly a graceful exit.

Rather than focusing on dieting and depriving yourself, which we all know does not work, turn your attention to what you love. Because if you love your life, you want to take care of your body. If you love your life, you don’t want to spend it making yourself sick or uncomfortable. Even if you knew you only had six months to live, you might eat differently, you might even begin exercising everyday but it wouldn’t be because you were ashamed of your body. It wouldn’t be because your thighs weren’t thin enough or the stitches of your life weren’t good enough. It would because you didn’t want to miss a minute of the time you had left.

Why wait? Why not cherish every crooked stitch of your life? 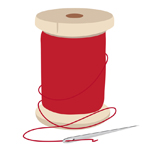